From steaming jungles to epic mountains, Nepal is equipped with fascinating images to showcase in everyday life. And not to miss, Everest three pass trek also falls in between the pine forests and white ranges, that challenges trekker’s strength once in their lifetime.

Years of training and thousands of dollars are few major investments to drive in the Everest Base Camp. Infused with the challenge, beauty, and adventure, the treks allow you to unravel the incredibility of the Everest region and its circular route.

Already known as the home for the tallest peak Mount Everest (8848m), the journey is rewarding taking the trekkers across three high passes Cho La (5,420 m), Kongma La (5,550 m), Renjo La (5,360m). The escapade is a chocolaty loop that starts from Lukla (world’s scariest mountain airport), or with a land option from the mountains of Salleri, Jiri, Phaplu or Shivalaya.

If you are the one who is looking up for the deadliest trial, then you should surely intent this trek. To make the entire trip a whole package filled with strenuous and audacious, here is the detailed information which might help you raise victory on it.

OVERVIEW OF THE THREE PASS TREK

The Everest region is one of the most highlighted destinations, while the three-pass trek leads to the trekking adventure. It is an ultimate enticing experience blending the local Sherpa culture and mountain views.
As the name itself denotes the journey of three high passes, the trek goes through the high channel linking the four valleys of Khumbu, Bhotekoshi, Imja Tse and Gokyo.

In short, this is an extravagant journey that cannot be compared to any treks all around the world and which is bound to give you an unleashing reminiscence.

After the exciting flight to Lukla, we then advance towards Namche Bazaar, the gateway to Everest. An exquisite village, from where the trekking trail to Three passes get diverged and from where we trod towards Lungden and Thame (close to the Tibetan border).

To captivate the views of shimmering parades of Everest and nearby the Himalayas is Rejo La pass. After Rejo La, we move on to the Gokyo Ri and hike on the largest glacier Ngozumpa before crossing the Chola Pass.
After that, we shall join the famous trekking route in Khumbu valley to hike on the Kalapatthar peak. Then the three-pass trail moves on to Chukung Ri, where you get the unobstructed view of Nuptse, Ama Dablam, Makalu, and Lhotse.

As we move down, we trek through the Tengboche monastery and complete the circular route of the three-pass trek.

#1. Higher the challenge, greater the reward

The 20 days trek is much more difficult than the classic Everest Base Camp (EBC) trek. Not only is the journey longer but it involves navigating the three high passes: Cho La, Renjo La, and Kongma La. Though the trek has segregated two days for habituation and repose, one still needs to hike for nearly 5-8 hours a day at an extremely high altitude. To complete it, one surely needs determination, fortitude and a certain level of fitness.

#2. Closer to the wilderness

Very few people muster their courage and go for the three-pass trek. Hence, the number of human habitats is lesser. The route to the trail disunites after Namche and takes you to the extraordinary Khumbu region. The only people you encounter on the way is another group of daring trekkers and only the breathtaking nature.

While exploring you shall encounter traditional Sherpa village. The village holds great history and is a home of many notable people such as Apa Sherpa, Kami Rita Sherpa, and Phurba Tashi Sherpa.
Further, the place also popular for the oldest monasteries in the Khumbu region. The village is a spot-on destination for spirituality, resilience, and beauty. 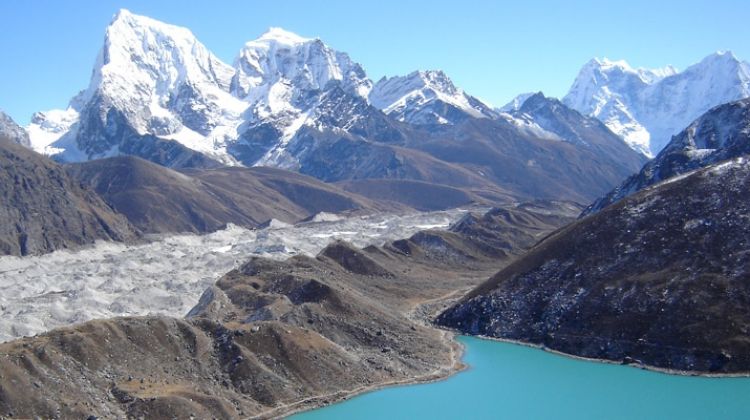 A close view of the tallest peak Mount Everest. Yes, in this trek after summiting two peaks Gokyo Ri and Kala Patthar. Kala Patthar (the black rock), is the highest peak of the Everest Base Camp and is popular for its amazing views. It is also one of the points which need no technical skills to climb it. From here, you get to see the spectacular view of Sagarmatha along with the surrounding views of Lhotse, Nuptse Nup, and Changtse.

From Gokyo Ri, you perceive the 4 tallest peaks in the world; Everest (8848m), Makalu (8475m), Lhotse (8501m), and Cho You (8153m). On the exploring portion of Gokyo, you shall come transversely to Ngozumpa glacier and the six remarkable lakes in the highest altitude.

As the three-pass trek is completed mostly by making a circuit, there is less chance for the trekkers to land in the same place twice. Therefore, the explorer gets a perception of Khumbu glacier to be the largest one, whereas Ngozumpu Glacier of Gokyo Ri is the one. The glacier runs 22miles (36km) down the Gokyo valley making it the longest one in the Himalayas.

The weather in the Everest Three Pass Trek can be challenging. Hence, the perfect season to trek throughout the year is September-November and March-May.  During these two seasons, the cloud is clear, offering stunning views of the Himalayas from any corners. Further, the flight to Lukla is less risky compared to other seasons for the monsoon can challenge the travelers in an uncertain way.

Himalayan Hero Adventures has been organizing Everest Three Pass trek every year including safety and affordability. For information on the trek, package contact us or send us a quick mail at info@himalayanhero.com