Take a short trip to Nuwakot before its gone!

“Nuwakot, a destination where the Kings made a plan to invade Kathmandu valley.”

Nuwakot, the district of hills, stands high with the proud historic fortresses. The valley beside the authentic Newari culture charm triggers the ancient hypes. Located at an elevation of 900m, the citadel remains untouched by the modern hoists. Just 3-4 hours away from the Kathmandu valley, the district has a population density of 250/km2.

Nuwakot is an off beaten track destination so for a pretty comfortable journey you must either take a private transfer or for more localize traveling public transport is always there. For the archeologist or historians, Nuwakot can be an “undiscovered” part.

An amazing district and the best secret keeper since the historic era. The place has a major historical significance then, and now the hilltop has now become a center of attraction for every tourist. The hub enthusiastically practices primitive culture.

Several tribes and clans belonging to Tamang, Newar, Magars, Dalits, Chettris, and Brahmins reside showcasing their own unique lifestyle and culture. Since the district lies closer to the Langtang Himalayan Range, it is the vantage point demonstrating the lush vegetation & while Himalayan range.

4 Things to do in Nuwakot, when entered as a short trip

As you move towards the steeper road on the hills of Nuwakot, the green and white landscape becomes medieval. The valley is dotted with green trees and farmlands; therefore, the place is perfect for carrying out adventurous activities such as cycling, and hiking.

#1. The popular Saath ‘7’ Taale Durbar
The mansion is the centerpiece of the district. Built by the late king Prithvi Narayan Shah, in 1762, the seven-story fortress was created as a residing a palace by the King, after conquering Nuwakot. Before, annexing Kantipur valley (Kathmandu), the town served as the capital.

The citadel exists in the elevation of 900m, holding cultural and historical significance. Despite continues attack by the Malla kings and Chinese forces, the monument stands mightily. An interesting side trip crossing the Trisuli bazar, and an hour of hiking, you are there seeing the durbar.

The 7-store mansion was built by the Newars of Lalitpur; hence, the durbar speaks a lot about the Newari architecture. On the eastern south of the durbar is a “Rangmahal” palace, made up of oily bricks. The spot was created for recreational purposes by the king.

#2. The hiking destination “Suryachaur”
The closest and easiest hiking destination of Nuwakot from the Kathmandu valley. An amazing place to view sunset and sunrise. Just an hour of walk from “Gurjebhanjyang”, the place is an ideal spot for panoramic views of white mountains such as Mt.Ganesh, Annapurna range, Gaurisankhar, and Langtang. Yes, a quick horse-riding experience can also be taken. 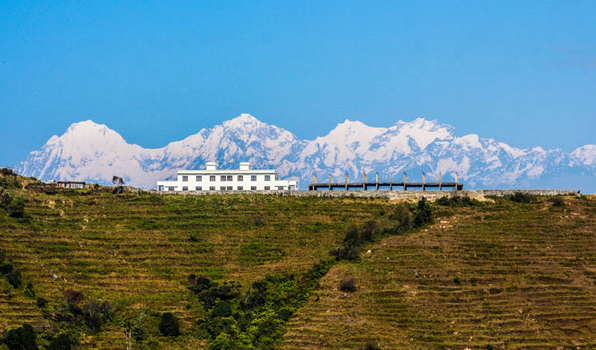 The hiking program allows the trekker to take a balanced flavor of nature and countryside culture. During your hike, you go through the dense forest, and trails including descends and ascends. From the several parts of trails, you get a bird's-eye view of Kathmandu valley.

Situated in the Northern part of Kathmandu, just 15km away, Suryachaur is a home for rare birds. Once you get to Suryachaur, you can get a spectacular view of white mountains more closely.

#3. Kakani, Nuwakot
A new morning in Nuwakot. A popular viewpoint situated 26km north-west. The hill station gives a clear view of the developing Kathmandu valley, from the height of 2030m. During the month of April/May, you get to see the beautifully covered mountains with Rhododendrons. The place is also surrounded by beautiful parks; Thai Memorial Park, which was built by Thai Airways in the memory of 113 passengers who died in an air crash in 1992.

The place is also popular for the fresh fish eatery. You can experience a live fish meal, with authentic Nepali food at the Kakani view tower. Kakani is quiet famous for re-treats, meditation, rock climbing, training, and development.

#4. Sindure Jatra, a celebration of colors
A major festival of Nuwakot people. Celebrated on the Chaitra Purnima, for nearly 10-12 days. Every year the festival is approached in the same festivity mood and enjoyed thoroughly. The festival also marks the arrival of Nepalese New Year and welcomes the spring season. 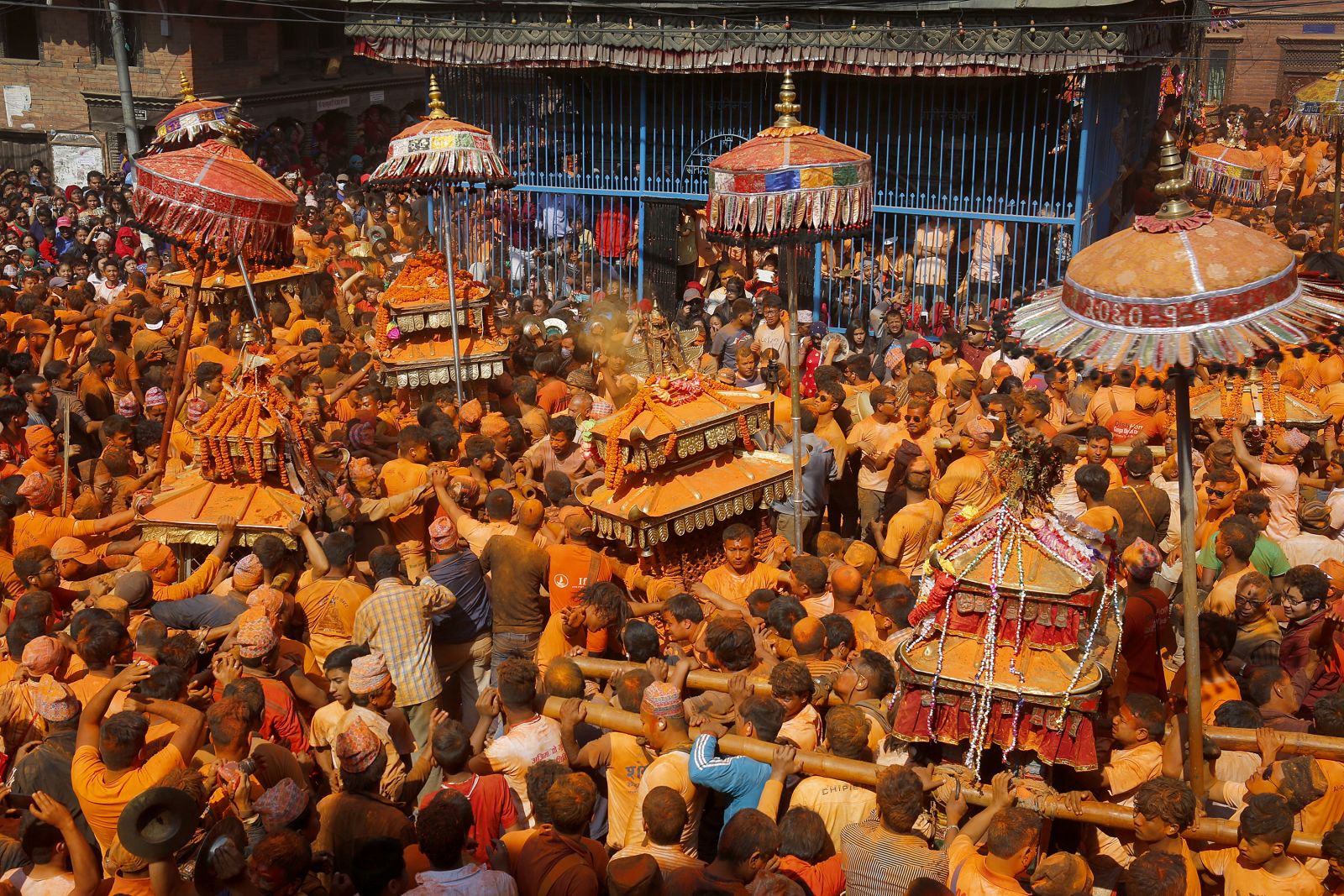 A massive procession is taken out, carrying a wooden chariot. People greet and smear with Sindhur and perform traditional activities (dancing & singing).

Nuwakot was noted as a fortress area since the Malla regime since 1201-1769 CE.  During the period, Nepal was not unified and had 22 & 24 small states. Before conquering Nuwakot, late King Prithvi Narayan Shah was slapped by a military defeat. But on September 26, 1744, the late king made a surprise attack and got a permanent control of the district. Nuwakot afterward served as a key staging ground for the three Malla districts (Bhadgon, Patan & Kathmandu).

The named Nuwakot was derived from the word “Nawakotta” which means nine forts. Making Nuwakot hill as the key fort including remaining forts- Simalkot, Belkot, Salyankot, Bhairabhkot, Malakot, Kalikot, Pyaskot, and Dhuwankot.  Due to the influence of Kantipur valley (Kathmandu) rest houses, dabalis, stupas and temple of enchanting archeological significance were developed and practiced.

FAQ’s WHILE TRAVELING TO NUWAKOT

#1. How to reach Nuwakot?
If you are a single traveler, you can take public transport or if you have a whole pack with you then you can take a bus from the route Kathmandu-Naubise-Ghalci-Nuwakot.

#2. Approximate hours taken?
Hmm! From Kathmandu, the tentative hours taken is 4 hours, if you don’t stop anywhere in between. If you take short breaks in between, then 5 hours traveling is on.

#3. Are roadways safe in Nepal?
Yes, it is, the highways are safe for group travel or private travel.

#4. In between are there any attractive places to land in?
Yes, there are. In between, you can sneak to Jalapadevi temple in Gaighat or Kakani.

#5. Any good hotels/motels/homestay?
Yes, there are several attractive, hygienic, safe hotels, homestays and motels in Bidur, Nuwakot.
A short trip is always recommendable. And Nuwakot won’t let you down. You can travel early in the morning and come back to Kathmandu the very day. So, if you have a day off, Nuwakot can be your ultimate planned destination.

Himalayan Hero Adventure has a carefully planned package for Nuwakot. Besides trekking, hiking it also offers Volunteerism and Educational packages. An individual interested to know further about the package can contact us! Make your travel a fun-filled one